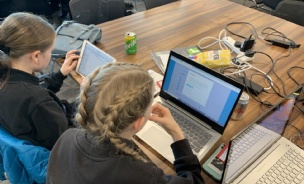 Rising to the challenge at the CyberFirst Girls' Competition

The Tech Tortillas, aka Y8s Holly, Eve, Freya and Sophie, competed on Saturday 8 February in the CyberFirst Coding Competition. This was the semi-final stage held in Leeds at the accounting firm PriceWaterhouseCoopers' headquarters.

Over 3,000 teams entered and on the day the girls came 26th to beat many of the 150+ teams competing in a live competition across the north of England. There was a live scoreboard detailing their progress and the top 10 teams will advance to the final stages.

Having done so well, the girls will now be mentors for the current Y7s and we will compete again next year. The girls were tested across many different areas from encryption, security and networking to logical problem solving. Some questions were first-year Computer Science degree level! They did incredibly well and we are all very proud of their achievement.